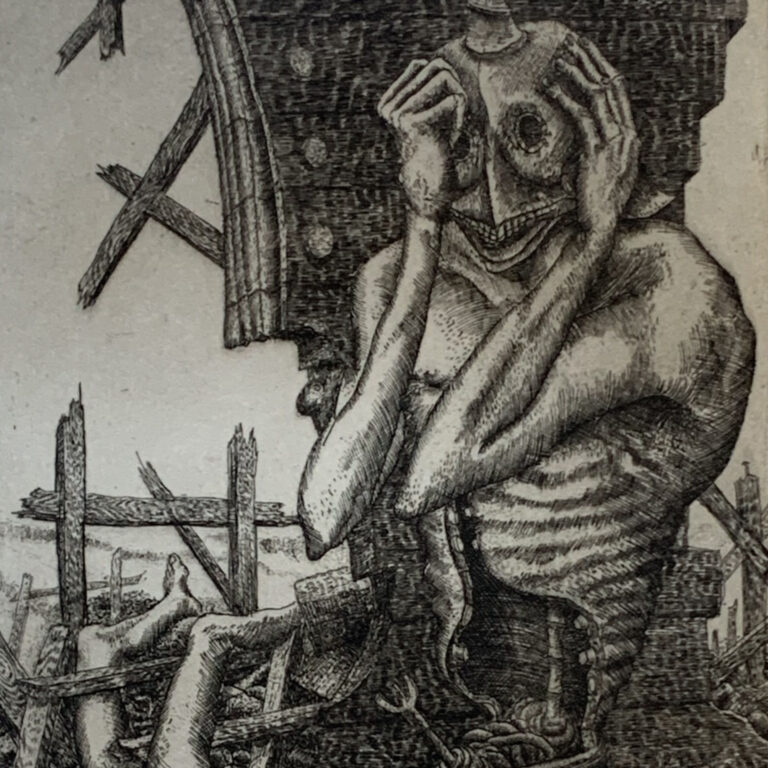 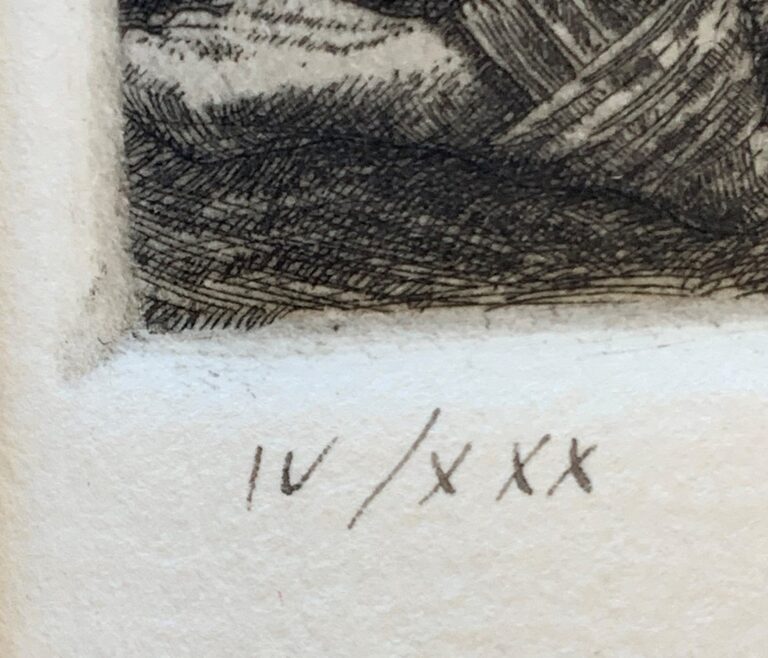 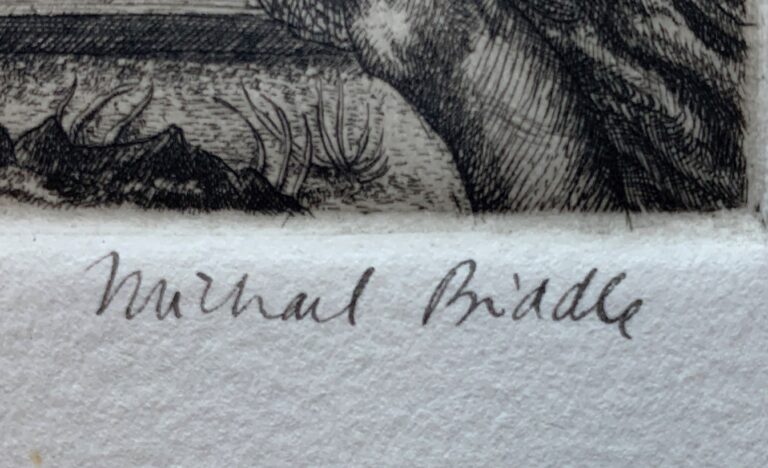 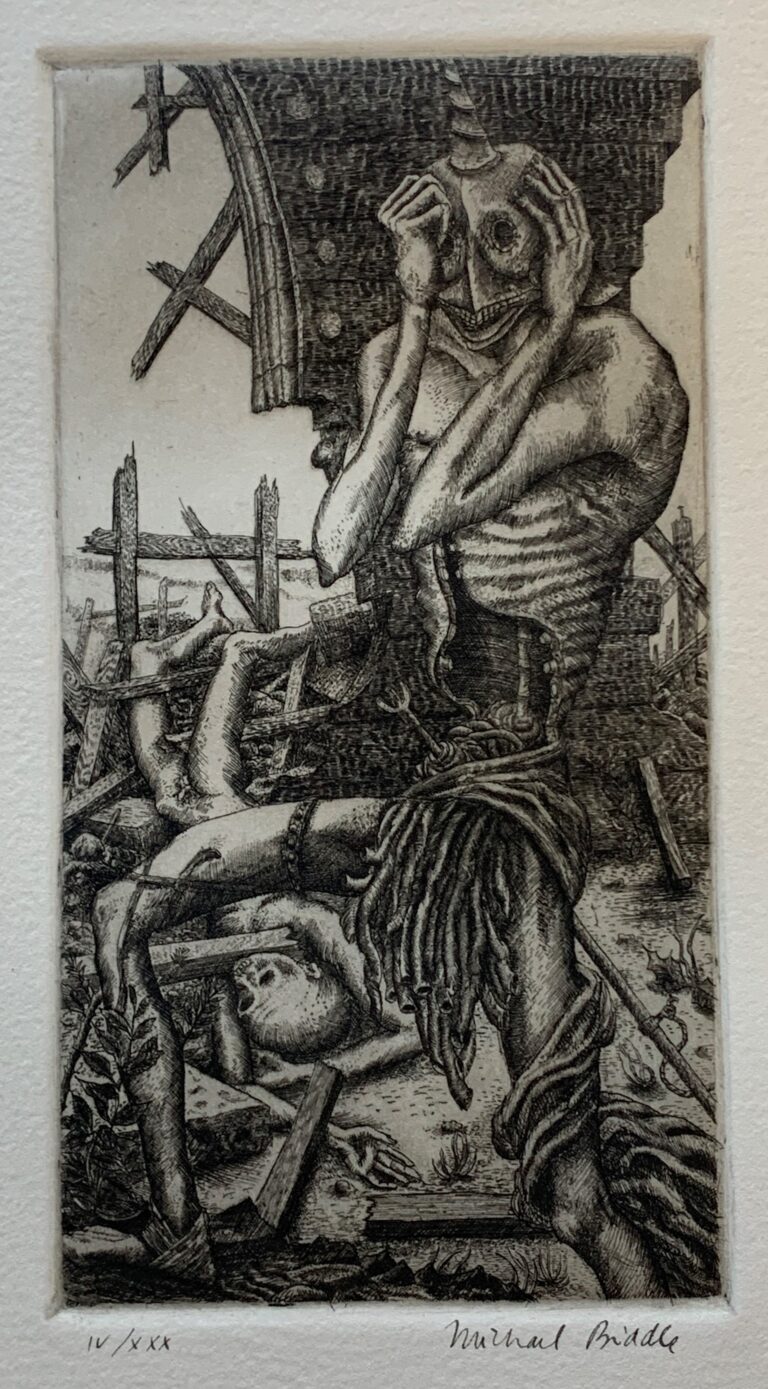 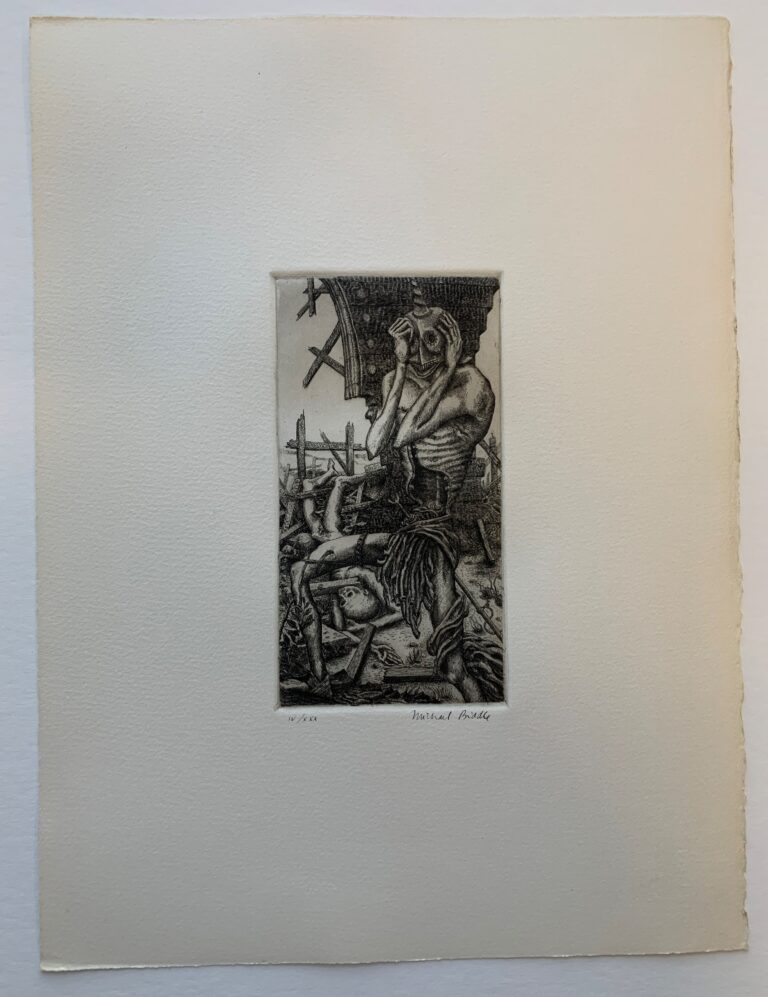 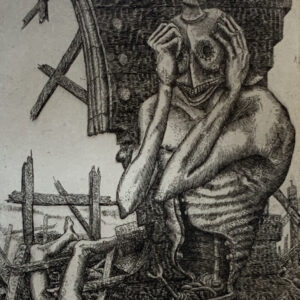 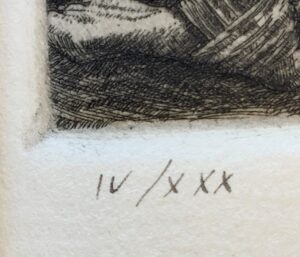 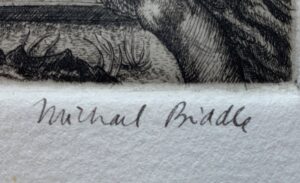 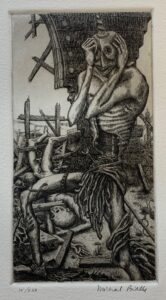 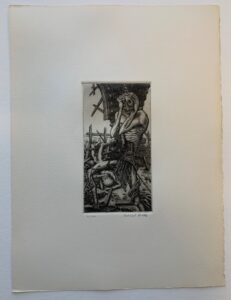 Michael Biddle is the son of famed social realist painter George Biddle. Michael took up the mantle of his father’s work, updating it for the second half of the Twentieth Century.

Biddle’s work has often been compared to that of Hieronymus Bosch, the late-Fifteenth Century artist who used fantastic illustrations of religious concepts and narratives to describe his vision of humanity’s desires and deepest fears. In the Victims Portfolio, Biddle portrays humanity’s deepest failures. This etching is a breathtaking depiction of suffering and agony.

In 1968, the Massachusetts Review published a new version of the Antigone written by Theodore Stinchecum. The traditional story relates that after the death of Oedipus, his sons Eteocles and Polynices shared the rule of the city Thebes. But Eteocles and Polynices quarreled and Eteocles expelled his brother. And while they agreed to alternate rule each year, Eteocles decided not to share power with his brother after his tenure expired. Therefore, Polynices left the kingdom, gathered an army, and attacked the city of Thebes. In an outcome unsurprising in a Greek saga, both brothers were killed in the battle. Making matters worse, King Creon, who ascended to the throne of Thebes after the death of the brothers, celebrates Eteocles but decrees that Polynices is a traitor and is not to be buried or even mourned on pain of death by stoning. Antigone, Polynices’ sister, is caught defying the king’s order. She is brought before Creon, admits that she knew of Creon’s law forbidding mourning for Polynices, admits that she chose to break the law, and claiming the superiority of divine over human law she defies Creon’s cruelty with courage, passion, and determination. As he had promised to do, Creon orders Antigone buried alive in a tomb. The blind prophet Tiresias warns Creon that the gods disapprove of his leaving Polynices unburied and will punish the king’s impiety with the death of his own son. After rejecting Tiresias angrily, Creon reconsiders and decides to bury Polynices and free Antigone. He discovers, though, that she has hanged herself. His son Haemon, who was in love with Antigone, commits suicide with a knife. His wife, Eurydice, kills herself in despair over her son’s death. The outcome? By her death, Antigone has destroyed the entire household of her adversary. The play ends with a somber warning from the chorus that pride will be punished by the blows of fate.

And Stinchecom’s version? It begins with an announcement by the narrator:  “The Ballad of Staring at Corpses.”  Like Stanley William Hayter’s Hektor, Stinchecom reinvisions the Greek tale with a modern, critical eye.

This work is a masterwork illustration of the profound emptiness of the moral certainty that leads to war—and the death and destruction that comes in war’s wake.

Medium:
Etching hand-pulled by the artist
Paper:
On Arches Cover paper
Date:
1973
Edition:
This is the 4th impression out of the edition of 30, numbered with Roman Numerals.
Signature:
Hand-signed by the artist, in ink, en recto lower right. Editioned, in ink, en recto lower left.
Framing:
This work is unframed but professional framing is available at discounted cost with little delay. Please select from the framing options or contact us if you wish to discuss the framing of the work. We frame exclusively with conservation-grade materials and put the work behind 99% UV-filtering art glass or Plexiglass.
Condition:
Excellent condition but with modest bruising and soiling of edges.  Crisp printing, excellent inking, full margins.
Sheet Size:
15 in. (h) x 11 in. (w)
Plate Size:
3.5 in. (h) x 7 in. (w)
Provenance:
From the collection of the storied Allan Stone Gallery, New York.