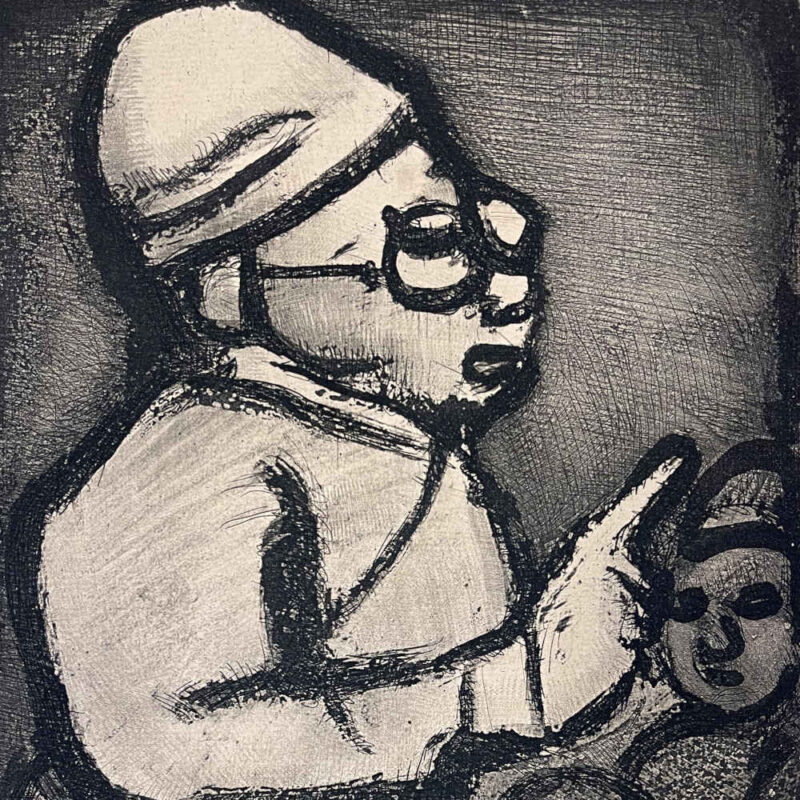 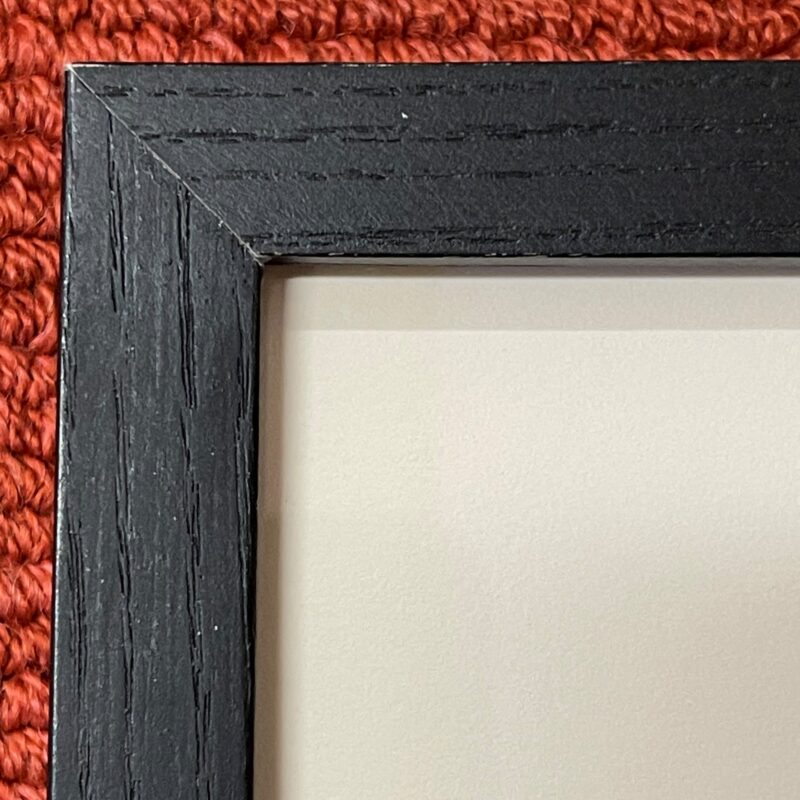 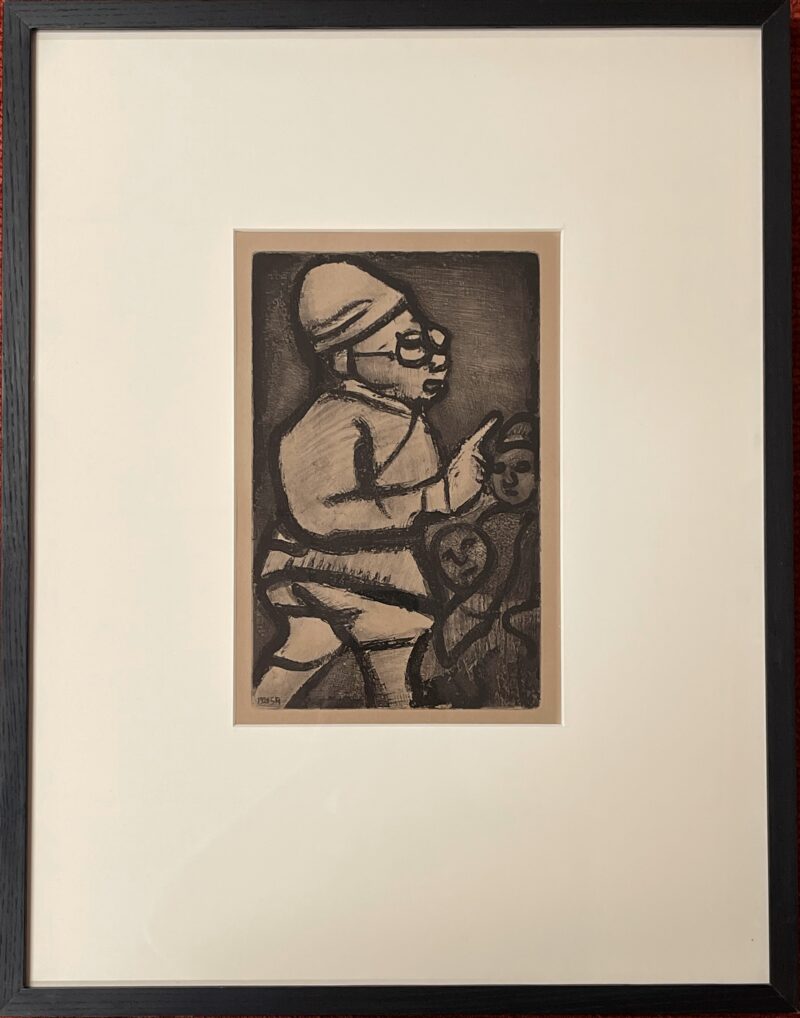 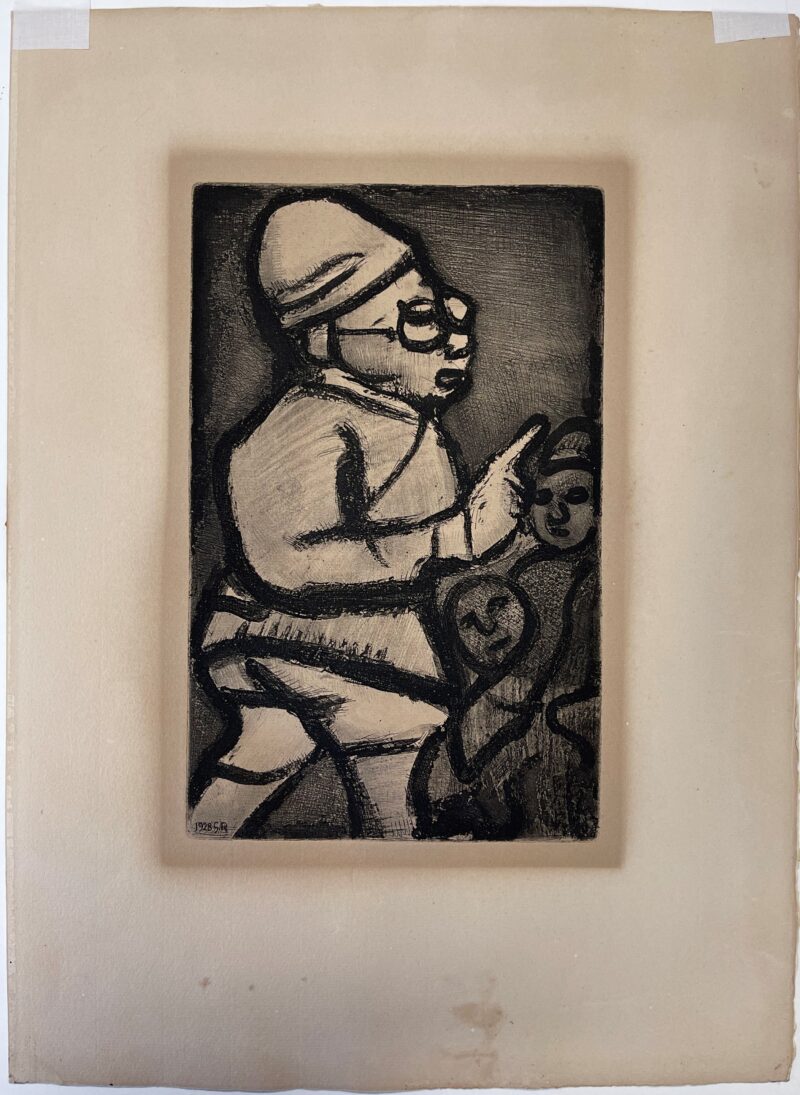 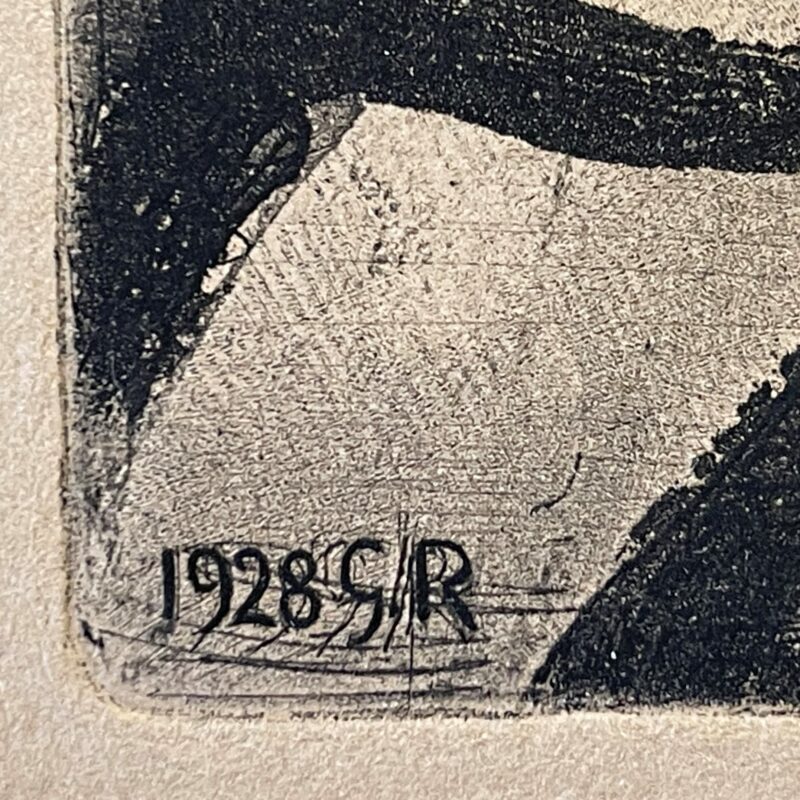 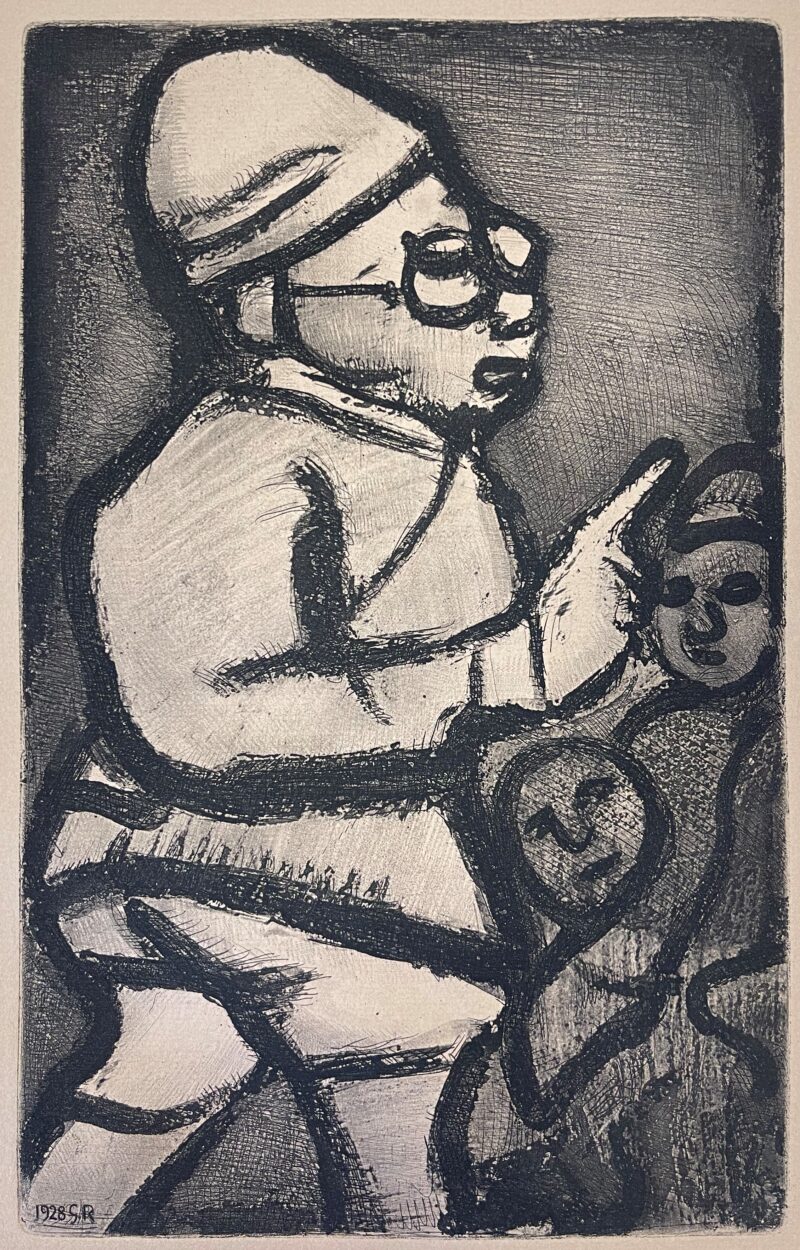 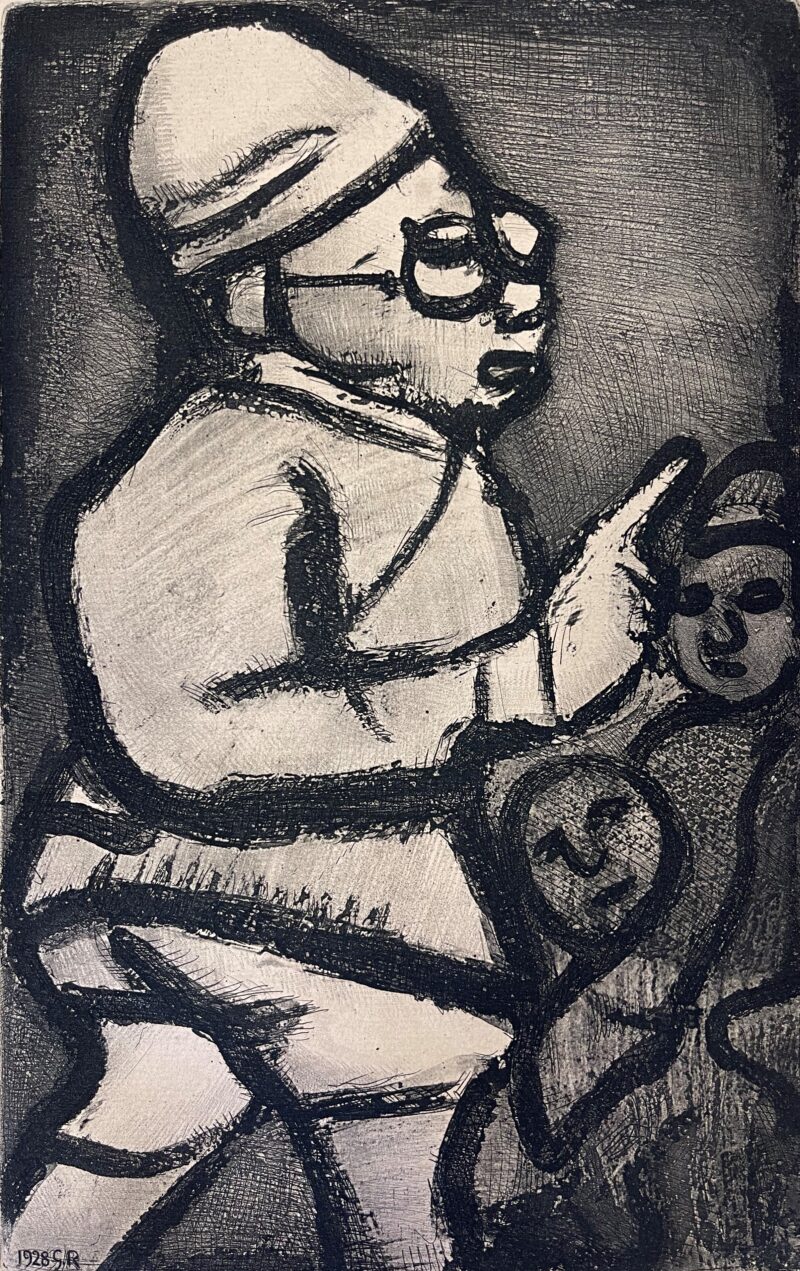 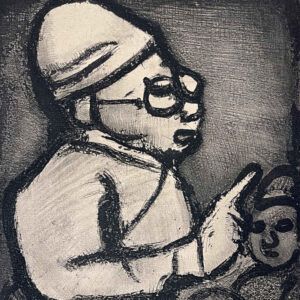 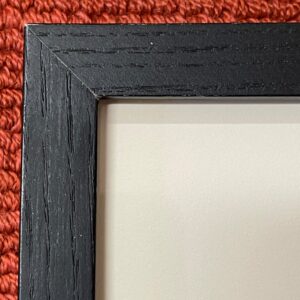 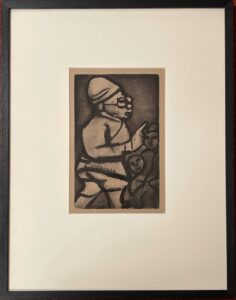 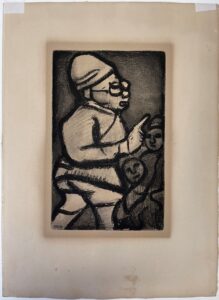 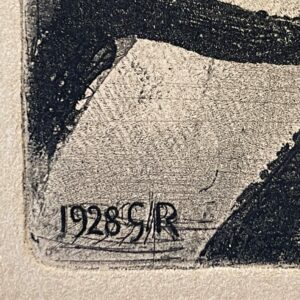 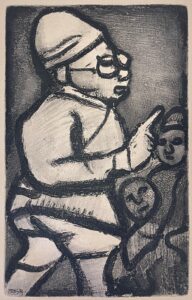 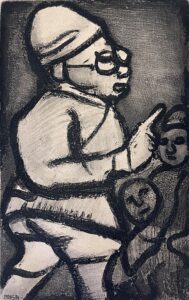 Note that this is from the first edition printed, not the later reduced-size editions.

Rouault began working on the Reincarnations of Père Ubu in 1918; he returned to the plate and produced the final version in 1928. It was not published until 1932, though, when an edition of 225 pencil-signed impressions was made along with 305 portfolios for Reincarnations de Père Ubu containing suites of the etchings on Arches and Rives papers.

Examples of this work are held in the collection of the Fine Arts Museums of San Francisco, the Metropolitan Museum of Art, and many other leading museums.

Medium:
Heliogravure, etching soft-ground, roulette, and aquatint
Paper:
Printed on fine heavy laid paper
Publisher:
Antoine Vollard, Paris
Date:
1928 (printed 1932)
Signature:
Initialed and dated in the plate.
Edition:
Rouault began working on the Reincarnations of Père Ubu in 1918; he returned to the plate and produced the final version in 1928.  It was not published until 1932, when an edition of 225 pencil-signed impressions was made along with 305 portfolios for Reincarnations de Père Ubu, containing suites of the etchings on Arches and Rives papers.
Framing:
Professionally matted and framed in a black-stained Ash frame behind 99% UV-filtering art glass using strictly conservation-grade materials.
Condition:
Excellent condition, with de minimis age toning and a glue stain hidden by the mat.
Framed Size:
22 in. (h) x 17 in. (h) x 1 in. (d)
Sheet Size:
17 in. (h) x 12.875 in. (h)
Plate Size:
10.5 in. (h) x 6.675 in. (w)