In 1961, shortly after completing his studies at the Akademie der Bildenden Künste in his home town of Stuttgart, Werner Pfeiffer emigrated to the United States. He first worked as an art director in New York to great acclaim. In 1969 he was appointed Professor of Art at Pratt Institute in New York. At the same time he assumed the position of director of the Pratt Adlib Press, a publishing venture of the Department of Graphic Art at Pratt which had been founded in 1956 by printmakers Fritz Eichenberg and Margaret Lowengrund. In the late 1960s he started to concentrate exclusively on his own work as sculptor, printmaker, and painter.

Pfeiffer’s work is steeped in Surrealism and Dadaism, blurring the border between reality and the imagination.  He likes his work to “play a coy game of hide-and-seek with illusion and reality.”

Books form a very special part of Pfeiffer’s œuvre.  They have been an intimate part of his life since he watched books being censored and burned in 1940s Germany. Paper was rarely available, if at all. Words were manipulated and erased—a literary crime that has influenced Pfeiffer’s art profoundly.  Alongside his more traditional art forms, Pfeiffer produces what he calls Book-Objects.  His Book-Objects are pure white and devoid of written words.  He explained, “I strip the books of their contents until all that is left is the carcass.”  But he does so not to celebrate the elimination of the written word but as a stark symbol of a censored world, a world without words.  “Words are more powerful than bullets,” he notes. “Words are, ultimately, what everyone is afraid of.”

Pfeiffer is also keenly aware of a new form (albeit a more benign form) of censorship:  He worries how books can survive in a technological world.  He “censors” books by deconstructing them and painting them white to send a message.  “At times, one has to play devil’s advocate to make a point. Books are one of mankind’s most treasured icons and they are disappearing.” In this digital age, Pfeiffer wonders, “Will books be different years from now? Will they be around at all?”

Pfeiffer’s works are often hands-on and interactive, urging the viewer to get involved in deconstructing and reassembling them, pivoting their parts and rotating their wheels. “My work is part game, part readings, part artistic expression,” he  explains.  Unsurprisingly, Pfeiffer has also made special use of typograms (pictures made out of letter forms).

Pfeiffer’s Book-Objects, collages, drawings, prints, paintings, and sculptures have been shown internationally in more than 100 group exhibitions and in over 70 solo shows throughout the United States and abroad.  In 2010 Cornell University presented a particularly important exhibition of the sculpture, paintings, prints, and books.  His work is held in the collections of the Art Institute of Chicago, the Badische Landesbibliothek, the Boston Museum of Fine Art, the Guggenheim Museum, the Library of Congress, the Metropolitan Museum of Art, MOMA, the National Museum in Stockholm, the 9/11 Memorial Museum, and many other important museums and collections, as well as numerous private, corporate, and government collections.  The Albright-Knox has a particularly extensive collection of Pfeiffer’s work. 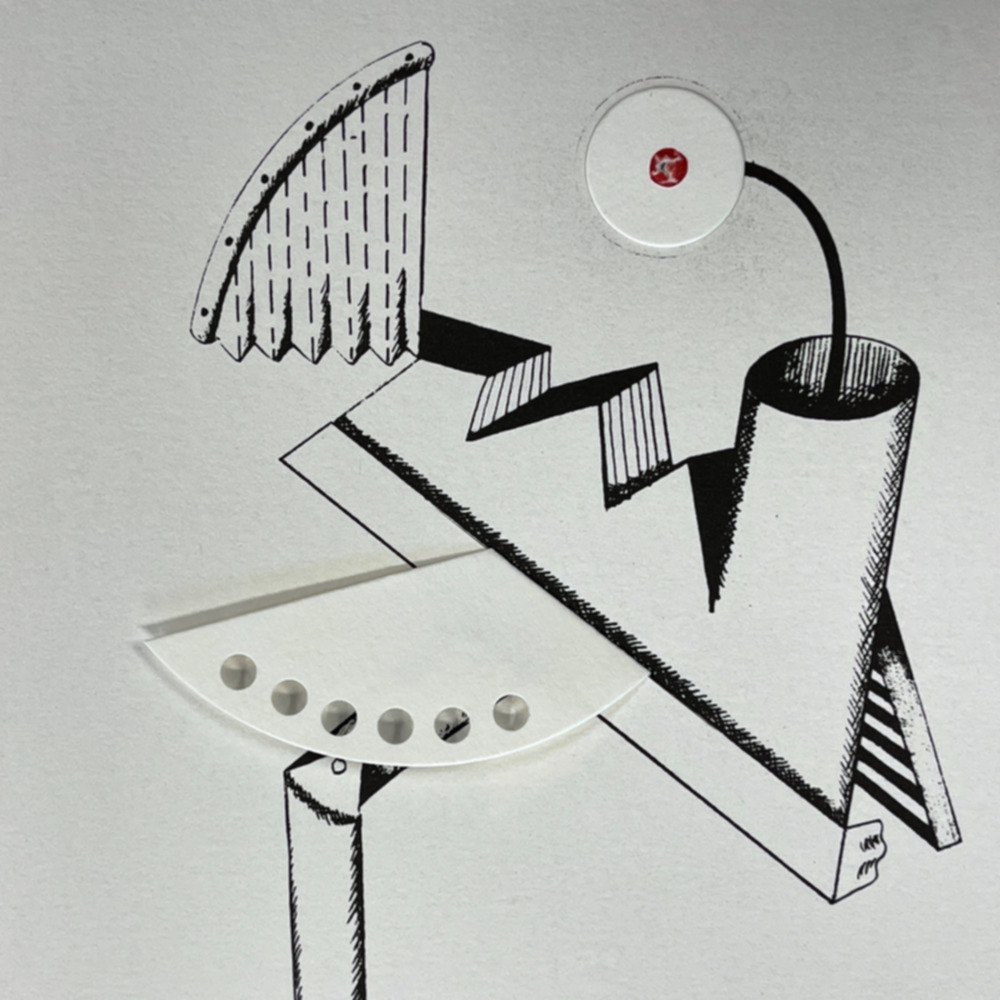