Emile Lahner was born in 1893 in the Carpathian Mountains of Hungary. His mother died in childbirth; his father died from an accident when Lahner was seven.  He was placed in the care of a bishop guardian and sent to boarding school to begin his training as an engineer. But when he graduated in 1910, Lahner was able to pursue his true passion: oil painting.  (Lahner’s enthusiasm for painting seems to have stemmed from a boyhood incident when he came upon a man restoring a crucifix near his village, and the man gave Lahner a tube of green paint.)  Lahner abandoned his engineering career in 1915 and enrolled in the School of Fine Arts in Budapest.  While studying there, Lahner saw an exhibition in Lausanne showing the works of the works of Delacroix, Van Gogh, and Monet; this exhibition had a profound impact on him.

Immediately following World War I, much of Hungary was sacked by neighboring Romania and the new Soviet Republic. During the subsequent “Red Terror” and “White Terror” thousands were either jailed or killed. In this harshly repressive atmosphere many artists and intellectuals, including Lahner, were forced to flee.  Lahner moved to Paris, where he could study the modern masters whose work had so moved him during his visit to Lausanne.  He arrived in Paris in 1924.  Like so many artists before him, Lahner was entranced by the brilliant light of the Mediterranean coast.

Lahner’s Success During the Depression Years

The Depression years were difficult for most artists, especially those who were not members of the elite gallery circles.  In 1931, Lahner moved to a working-class neighborhood south of Montparnasse where he lived in a small single room with a packed-dirt floor.  To make ends meet he took odd jobs as a painter for Paris theaters and movie producers.  Nevertheless, he developed a modestly successful international career at this time, exhibiting in Paris, New York, Rio de Janeiro, Sao Paulo, and Boston.  His work from this period includes landscapes, portrayals of animals and acrobats, and idealized nudes—but it was at this time that he also began to develop his abstract style.

World War II and After

As the Third Reich rolled across Europe, Lahner joined many artists who took refuge in Vichy France in the Dordogne.  He sheltered with the wealthy Averseng family. Exploring the countryside around the Averseng chateau, Lahner explored the many surrounding caves, where he discovered primitive wall art. After the liberation of Paris in 1945, Lahner returned to Paris and began to exhibit his work more frequently.  During the post-War era Lahner had steady work and traveled extensively.

Lahner had an exhibition at the prestigious Galerie Jeanne Castel in 1950, sponsored by the French writer Marcel Sauvage. In the preface to the catalog, Sauvage compared Lahner’s work to stained glass. This was prescient: Just a few years later, Lahner was commissioned by the Averseng family to design a chapel in the small Algerian city El Affroun.  As part of that project, Lahner designed the chapel’s stained glass windows.  (Interestingly, there was at that time a sort of mania over chapel construction: Picasso at Vallauris; Matisse at the Dominican Chapelle du Rosaire at Vence; Jean Cocteau for frescoes in Villefranche; Rouault for the church windows in Plateau d’Assy; Léger for the windows in Sacre-Coeur, Audincourt; and Chagall for stained glass in the cathedrals of Metz, Reims, and Rouen.) That work marked an important stop on Lahner’s journey to abstractionl his work with stained glass plainly had a profound impact on his abstract work for the rest of his career.

It was in 1959 that Lahner met Laszlo Laky, an American art dealer from California who became one of Lahner’s closest friends.  Lahner met Laky in Paris when he had a job working as a Hungarian-language guide for Laky; Laky was there looking for—but not finding—Parisian artists whose work he could sell in his Carmel gallery. At long last, Lahner confessed to Laky that he was a painter and after seeing Lahner’s work Laky became Lahner’s sole American dealer.)  Laky came to champion Lahner, and Lahner came to enjoy great economic and critical success in the American market thanks to Laky’s efforts.

In the Spring of 1961 Lahner received critical success in a watershed exhibition at the Galerie Jeanne Castel, underwritten by an old friend of Lahner’s, Leopold Sedar Senghor.  Senghor was a well-known poet and the former president of Senegal.

Perhaps the Cubism which influenced Lahner’s earliest work joined with Lahner’s stained glass work to create the distinct geometric elements of his 1960s abstractions; colored zones abutted one another at sharp angles, conforming to the space defined by lines.  Other colored forms were blurred at the edges, as they might be in nature. Contrasting tones gave an approximation of the effects of light and shadows, but there is no specific source of illumination. Critics writing of the Jeanne Castel exhibition found it difficult to categorize Lahner’s paintings of this period. His work, they noted, reflected a synthesis of Cubistic formulae with Impressionistic color. 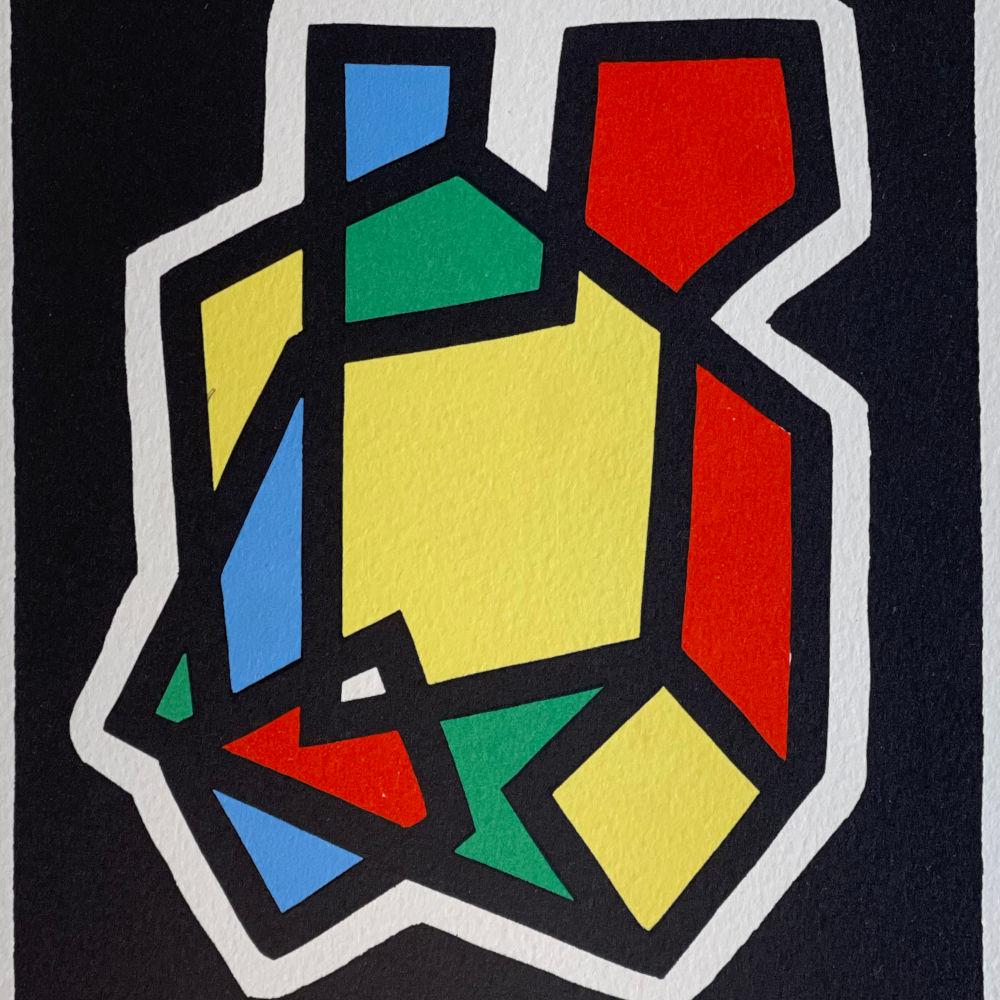 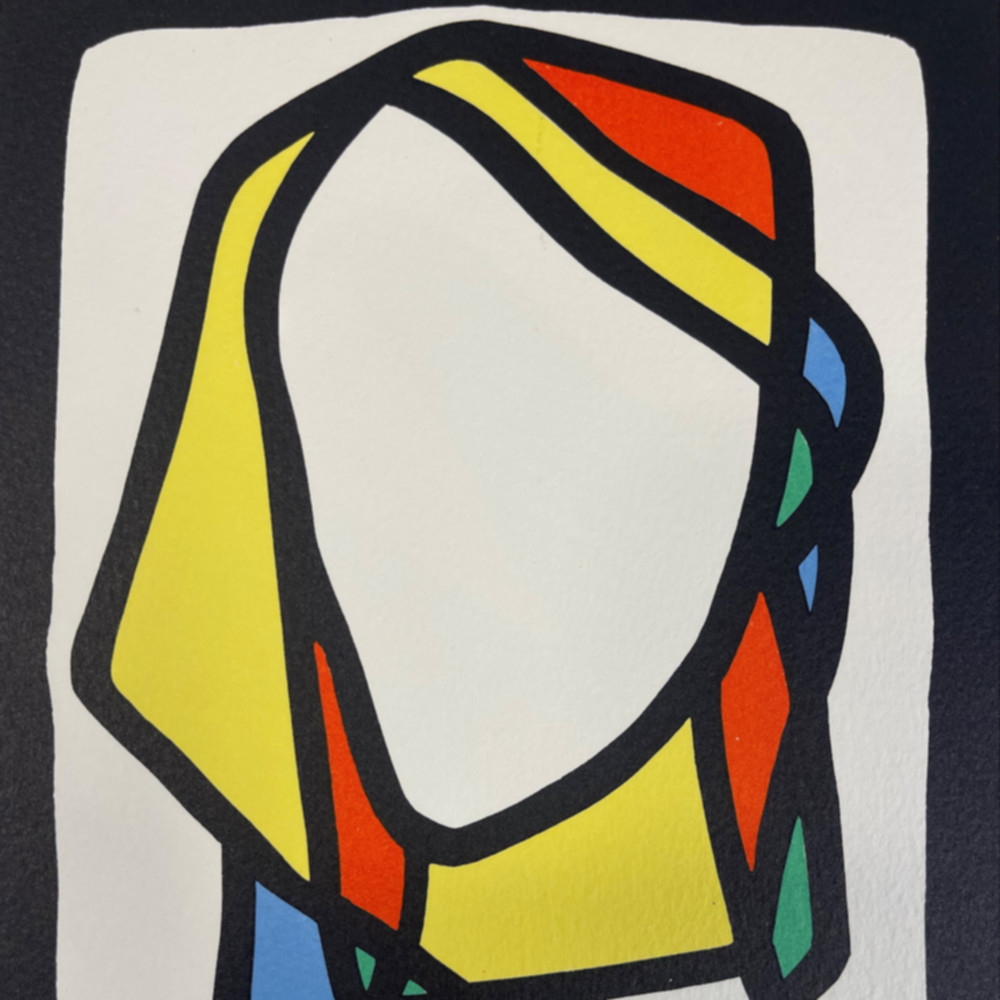